While some of you may be sweating over whether or not your current Android device will get the update to Android 4.2 Jelly Bean, you should probably be reminded that Android 4.2 is only a minor update from 4.1 and wasn’t even worthy of a name change. That honor may go to Android 5.0, which is already carrying around a popular moniker of Key Lime Pie.

While some Galaxy S3 owners are still without their Android 4.1 Jelly Bean update, most of you will be fairly optimistic that Samsung also provides the Galaxy S3 with an update to Android 4.2 at some point next year. Right now, the Nexus 4 and now the Galaxy Nexus have that honor only in terms of smartphones, with the Nexus 4 certain to get an instant update to the next major version of Android, if that does indeed turn out to be Android 5.0.

As you can imagine, there has been no official word from Google on their next major Android update, or any hints on what the Android 5.0 Google mascot will look like after Jelly Bean. What has happened this week though, is a benchmark apparently showing Android 5.0 in the wild – sending tech enthusiasts and media outlets into overdrive on the possibility of Key Lime Pie arriving earlier than expected. 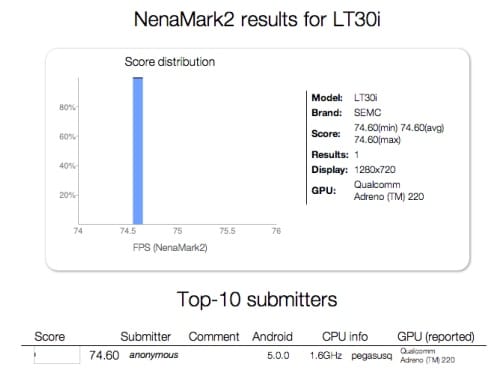 This benchmark was fairly surprising, as not only did it name tag Android 5.0, it also revealed that the testing device used was a Sony device with a model name of LT30i, which is an unannounced device not mentioned at all by Sony. Having said that, one of Sony’s newest handsets is the LT30p, which is more commonly known as the Xperia T.

As a result, confusion and speculation has begun on why a Sony device is being used to test the next major Android upgrade. One such reasoning could lie in the fact that the device is just being used for testing purposes only, with no intent of actually using the device to run Android 5.0 officially.

The other explanation is a much more exciting one, with early skeptics believing that Sony may be in line to build the next Nexus phone with Google and that they’ll have the honor of carrying Android 5.0 before anyone else in the process. In our opinion, it is all clutching straws at the moment and don’t forget this particular benchmark could be fake anyway.

Moving away from the Sony Nexus speculation though, what do you think your odds are on your current Android handset getting an Android 5.0 update? We would like to assume that the Galaxy Note 2, Nexus 4, Nexus 7, Nexus 10, Galaxy S3, Galaxy Nexus and the Droid DNA are all certain to be getting an update to Key Lime Pie.

Do you have a different device than listed above which you still consider to be a fairly new smartphone?