It was last October when Android 4.4 KitKat was finally released, which debuted on the Nexus 5 first. We had assumed it would be seen on the Nexus 7 earlier that year, but Google favored the smartphone over the tablet. Even though it has only been 6 months, we now look ahead to Android 4.5, which as yet has no official name, although Lollipop has been mentioned.

With Google I/O 2014 just a couple of months away it stands to reason that we will start to learn more about Android 4.5, and a recent tease does feel us with some excitement, as we get to see just what the new version of the mobile OS will look like — or so we assume.

A recent Android 4.5 preview gives us a good idea of the design of the mobile operating system, and one thing is very clear, it comes with a more simplistic, flatter look compared to KitKat. Comparisons have been made to iOS 7, as this also went for the flat design as well. 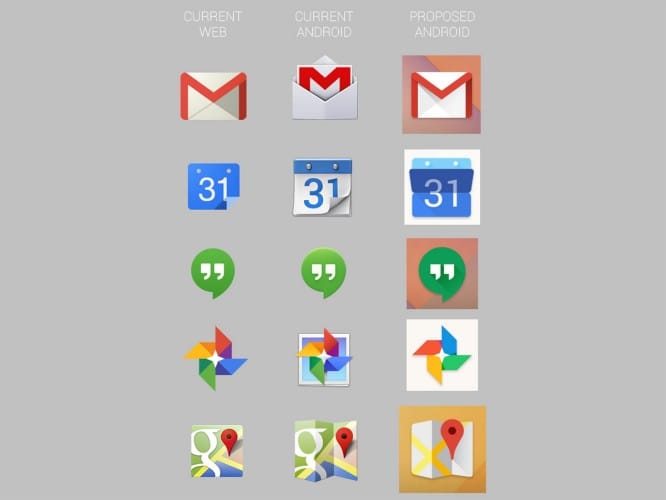 With rumors suggesting that Android 4.5 could be released on the Nexus 8 tablet first, we wonder if we are looking at a preview of the Nexus 8 software? Okay, so we had these rumors with the Nexus 7 last year, but with the larger tablet expected to be more popular than the smaller one, it makes sense to release it with the latest and greatest mobile OS available, and not one that would be around 8 months old once released.

Back to the design of Android 4.5 — Let’s say this is the next version of Android we are looking at, then the cleaner design will have a huge effect on the performance of the OS, which you can see just by looking at a side-by-side view of the icons above.

The render shows the icons are flatter and far more simplistic in design. Android Police came up with the renders themselves based on the knowledge they have so far.

Again, we expect Google to announce Android 4.5 at its I/O event on June 25th, but what device will it make it to first?