We have some worrying details to bring you now, as it has been suggested that phones which don’t run on at least a 1Ghz processor will not be receiving an update to the recently announced Android 2.3 Gingerbread software.

This hasn’t been confirmed by Google yet, but if you view the image from the LG Facebook page below, you’ll see that one of their employees has given the unfortunate news to a user who had been expecting the Gingerbread update on the LG Optimus S smartphone. 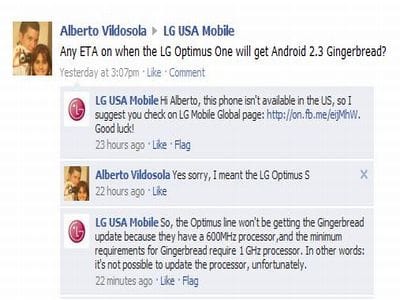 A few things to think about here. Either the LG employee is completely incorrect, he’s telling the truth, or LG has purposefully posted an outright lie, based on the fact that the handset only runs on a 600Mhz processor and they didn’t want to just state that the handset wasn’t getting Gingerbread.

What are your thoughts on this? If the news turns out to be true, then it’s obviously terrible news for original Droid owners, not to mention the recently released T-Mobile G2 which only runs on a 800Mhz processor. We’ll bring you more details on this as we get it.

What processor are you running on your handset?