After months of lurking in the shadows, the Android 2.2-related news is really in full flow right now. We have a couple of screenshots to show you now, which appear to show a MyTouch 3G handset running Android 2.2 Froyo.

As reported from Phandroid, the screenshots have come from a user called 4chan who claims to be an ‘Android trusted tester’. He has released two screenshots – which are particularly interesting.

The first is taken from the settings menu of a MyTouch 3G which displays that the Android firmware is ‘2.2’, while the second image appears to hint that one of the main features of the software will be automatic updates for apps.

If the screenshots are real, then obviously this is a huge deal. Imagine never having to update Google Maps again, or your favorite app being updated the next time you turn on your phone. Then again we shouldn’t get our hopes up too much, since these images could have been photoshopped. Either way, it poses some interesting ideas ahead for Android 2.2 Froyo. 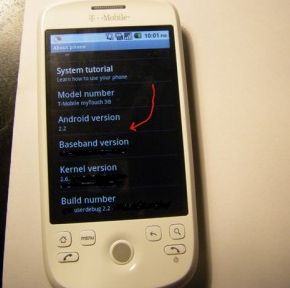