There have been a couple of newly released tablet PC’s from more unusual manufacturers of late, we have already reported to you about the Ciara Vibe Exo as well as the Creative ZiiO. We are now going to inform you of another tablet joining the party. It’s called the Velocity Cruz T301.

The specs of the device are look like this, it has a 7” capacitive touch screen with a resolution of 800×600, it has 4GB of internal storage and 256MB RAM, It has built in WiFi and expandable memory slots by USB or SD. The device will run on the Android 2.0 OS. This all sounds like the standard spec for a tablet PC but there is another thing that this device has going for it and that is the price, you can pick one of these up for $249.99. 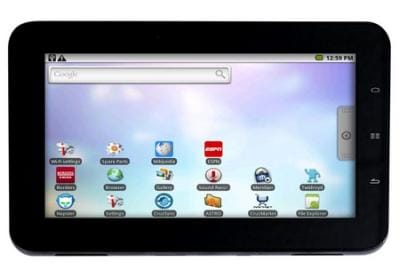 The Velocity Cruz is almost a hybrid between an eReader and a tablet PC. The Cruz has a fair few uses that we can tell you about. You can browse the web from any hotspot using its integrated WiFi; you can watch films on the 4:3 screen. You can use if for social networking and keeping up with your emails whilst you are out and about. Another major selling point for the tablet is, you can read and download eBooks between the Kindle app and store.

If you want to see the full specs of this device then you can get them from their official website here. If you would like to just go ahead and have one shipped out to you, you can pick them up from Amazon.com.

Would you say this is a tablet PC or an eReader? We are undecided but want to know your thoughts, let us know in the comments below.