These new cards utilize variants of the 40nm Barts chip, despite being regarded as mid-end cards they pretty much match Radeon’s previous high-end cards in terms of performance. You can see a spec comparison chart below, as you can see in some regards the HD 5870 is still superior, however let’s not forget that this is a $350-$400 card, whereas the 6770 is expected to retail at roughly $250. 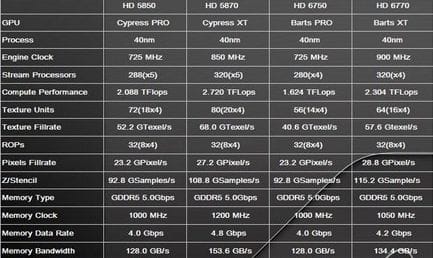 The fact that Radeon can get this performance at a relatively low cost makes you wonder what they have in store for us with the HD 5870’s successor, we have previously briefly spoke about the HD 6970, which should arrive in December, I wonder how this card will compare to the HD 5870.