If you think your quad-core processor is fast, think again, we are hearing that the guys over at AMD are working on a new platform called Corona, this will apparently bring 10-core processors to the desktop market, pretty blowing huh?

We don’t have too much to go by right now, however a brief article posted on Gizmodo features an image which appears to show AMD’s roadmap for 2011 and 2012, the roadmap is split into three categories (essential, mainstream and enthusiast) and the Corona platform is in 2012’s enthusiast section.

Below we have embedded the image which we found on Gizmodo, it clearly shows that the Corona platform will be the top-end platform for desktops in AMD’s arsenal during 2012, slightly behind this is the Virgo platform and then the most basic platform will be called the Deccan platform. 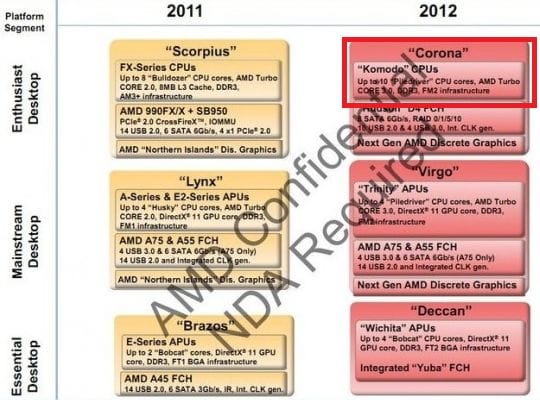 So what can we expect to see from the Corona platform? Well if Gizmodo’s post turns out to be accurate we can expect an FM2 infrastructure, DDR3 support, 10 ‘Piledriver’ cores, up to 8 SATA 6Gps ports, 10 x USB 2.0 ports, 4 x USB 3.0 ports, support for RAID 0/1/5/10, next-gen AMD discrete graphics and AMD Turbo Core 3.0 support.

According to Gizmodo the ‘Piledriver’ cores which we spoke about in the last paragraph are enhanced versions of the ‘Bulldozer’ cores which we will see in processors set for arrival sometime during Q3 of this year, you can find out more about AMD’s next-generation Bulldozer cores here, we can’t wait to see just what AMD has in store with the Piledriver cores!

The image also talks about the Virgo and Deccan platforms, these both utilize the same FM2 infrastructure as the Corona platform and will feature a DirectX 11 GPU core and DDR3 support, the biggest difference is that the Virgo platform supports up to 4 Piledriver CPU cores, whilst the Deccan platform will support up to 4 Bobcat cores, needless to say that the Bobcat cores are not really comparable to the aforementioned Piledriver and Bulldozer cores.

We can’t quite imagine just how fast 10 core processors will perform for standard desktop uses, we also wonder if this sort of technology will be used in next-gen consoles such as the Xbox 720, the potential is truly huge.