Amazon made a good impression on us with its Fire TV set-top box, and gave Apple and Google something to think about; one because Apple TV has no gaming feature, and two because Chromecast was just a streaming USB stick. However, with Google now getting in on the set-top box market and also caters for those who like to play games on such a device, Amazon knew they had to launch their own stick.

The Amazon Fire TV stick was recently announced and has the makings to take on the Chromecast and the Roku Streaming stick. However, a Amazon Fire TV stick review is needed to gain a better idea of just what the small device has to offer. One thing is clear though, the online retailer is prepared to take the likes of Roku on, and are not afraid to get creative, and make a loss against Google. 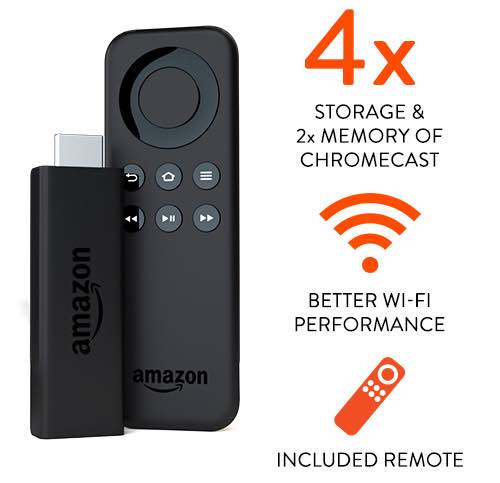 Fire TV Stick performance – If we were to compare Amazon’s stick against Chromecast, then the stand out differences are to its performance, the former has 4 times the performance advantage, along with twice the amount of storage thanks to its dual-core processor and 1GB of RAM. You can notice the difference with this improved hardware, especially when going through the 200,000 TV episode and movies, as well as millions of songs.

Inviting price – Even though the Amazon Fire TV is yet to go on sale, we can tell you that you will be attracted by its pricing options, as there are three available to you. The first is by purchasing this as a Prime member you will pay just $19 from next month, and $39 if you are not. We loved the addition of the small remote control, as this does make life easier, especially with its voice search. However, you will have to pay another $29.99 for the privilege.

Easy to use – We will no doubt see most Fire stick reviews point out how easy Amazon’s stick device is to use, as setting up is a simple process, and does away with the need to use your smartphone, meaning you no longer have to miss a call, text or mail while watching content on your TV. The other good thing it has going for it is how the remote does not require line of sight like the Apple TV remote, and so will save a great deal of stress there. If you do not wish to spend a further $29 on the remote, then you can use the Android app, or iOS controller app, which will be released a little later.

One negative – The one thing that puts us off the Amazon Fire TV stick is its need for external power, meaning it cannot draw power through the TVs HDMI port that it plugs into, which could prove a bit of an issue if you have no power outlets spare, or if you do, is yet another unsightly wire.

Overall impression – While Amazon’s Fire TV stick looks a lot like Google Chromecast, but works more like Roku, so you do not need to cast from your mobile device, it will instead tap into apps currently running on Smart TVs, and when you take in the price as well, Amazon really is onto a winner because Internet TV is breaking more boundaries than Network Television and Amazon is all set to be a significant player in this market.