Windows Phone handsets face some tough competition coming into the smartphone market, having to compete against devices which feature Google’s successful Android OS and Apple’s popular iPhone. The company will be hoping that their upcoming handsets will be able to keep up with their rivals; one of these handsets is the HTC Titan, which is now available for pre-order at Amazon.

HTC smartphones have already established themselves as some of the highest range of devices available on the market. Their Android OS, HTC Sensation and HTC EVO 3D are proving to be the most successful so far. The Titan, which can now be ordered for £490 from the online retailer, will be hoping for at least the same success with Window Phone on board.

The Titan is the successor to the HTC HD7 and just like its name suggests, it is pretty gigantic, boasting a 4.7” WVGA capacitive touchscreen. Unlike its name suggests however it is actually one of the lightest handsets available weighing just 160g and is only 9.9mm thick. Its top of the range specs include 16GB storage, 512MB RAM, a 1.5GHz Qualcomm Snapdragon SoC, a 1.3 megapixel camera on the front as well as a 8 megapixel camera on the back with dual LED flash, and an f/2.2 aperture lens also capable of recording in 720p HD.

According to ITProPortal, the device is expected have a tough time competing against another HTC device, the HD7, when it finally begins shipping in mid-October this year, as this handset has a similarly large display and is currently a lot cheaper. It is also expected to get Windows Phone 7 soon. Check out the link above where you will be able to order your HTC Titan online.

Are you impressed with HTC’s latest smartphone? 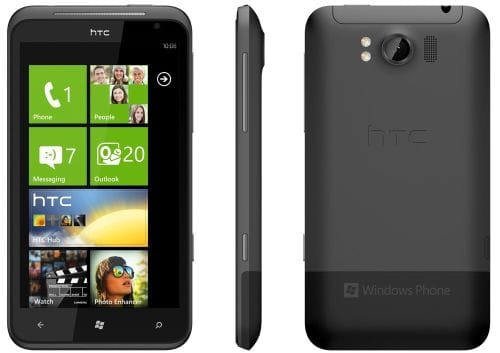