Hours ago we told you that TOTW 29 had gone live for FIFA 15. Now, we bring you a Gareth Bale CF/SF IF review as the Welsh wizard is once again the top pick from EA’s shortlist.

Bale just keeps getting better with each week and now EA has given him an 88 in-form rating for FIFA 15 Ultimate Team. He’s got some amazing stats on this new card, such as 95 for Pace, 87 for Dribbling and 86 for Shooting.

The big talking point though, is that this is a special CF card which changes Bale’s position from his usual RM card in the game by default. 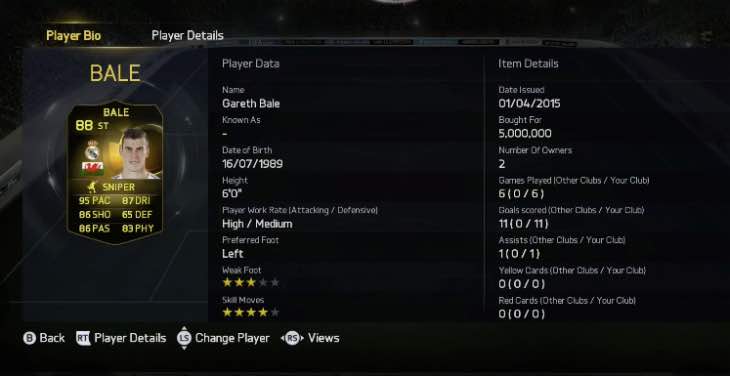 He can obviously play as an attacker no problem though, as we’ve just seen from his recent performances for Wales and previously at Tottenham. Looking deeper into the stats, we can also see that he has 88 for Free Kick Accuracy, 90 for Curve, 91 for long shots and a stunning 96 Sprint Speed.

Easily put, it’s one of the best cards in the entire game right now and we’re not surprised to see one user cough up 5 million coins for it.

The good side of this, is that we can bring you the review which takes a look at the card in detail and more importantly – shows some Gareth Bale CF gameplay for FIFA 15 for you.

Take a look at the video below and let us know if any of you are tempted to buy it. Good luck trying to pull Gareth Bale CF in a pack though!