How cool would it be to write a tweet and then get $20,000 in the process? Well that is just what Amanda Russell has done, as she has become the ‘Best Tweet Winner’. She will not win this prize in cash; instead it will go towards her college scholarship.

The Louisville-based KFC restaurant chain foundation had to look at over 2,800 tweets before they picked Russell’s, which paid her $142 per character. These now shows that spending your time on Twitter does pay, and can even help educate you — well in a roundabout way. 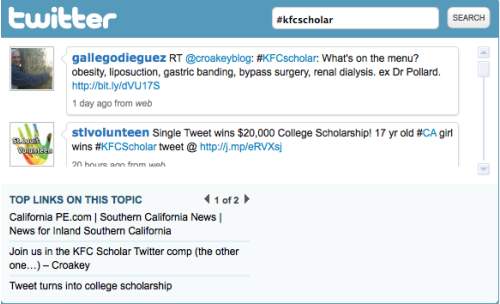 So what was special about this winning Tweet over the others that were sent in? Russell mentions in her tweet that about a missing ingredient in Colonel Harland Sanders secret recipe. Read here Tweet by visiting Huffington Post, who has more insight into this.

According to NBC Los Angeles, the Tweets sent in had to be judged on the quality and creativity, as well as being a compelling story and to see if it gave an insight into your entrepreneurial drive and ambition. Well, the winning tweet was only 142 charters, but it certainly ticked all the boxes.