25 years ago Sigourney Weaver starred as Ellen Ripley in James Cameron’s Aliens, now we can confirm that a first-person shooter which is based on characters and creatures from this blockbuster is headed for a Spring 2012 release, this game is called Aliens: Colonial Marines.

The game is being published by Sega and has been in development since 2006, recently the official Aliens: Colonial Marines website was launched, if you check out the official website (here) you can see the game’s debut teaser trailer along with the game’s first-ever screenshot, we have embedded both of these at the end of this post.

After watching the trailer you may be a little disappointed to see that you don’t get to see any of the game’s playable characters or gruesome enemies in detail, in fact all you really get to see is someone checking out the U.S.S. Sulaco’s computer logs whilst talking, both Ellen Ripley and Carter J Burke get mentioned during the dialogue and the game’s plot gets outlined. You also get to see some brief CCTV footage which shows one of the aliens aboard the abandoned ship.

Aliens: Colonial Marines is coming to PC, PS3 and Xbox 360, you can see a full list of the game’s features on its official website, we like the sound of the classic Marine weapons you can use (flame throwers, motion trackers and pulse rifles) also Sega has promised eerie, atmospheric and authentic environments, drop-in / drop-out co-op gameplay and the ability to customize your characters with perks, weaponry and new looks.

Before writing this article I must confess I wasn’t too excited about Aliens: Colonial Marines, however it looks like we could be in for a real treat next Spring.

Does Aliens: Colonial Marines sound more exciting then you had anticipated? 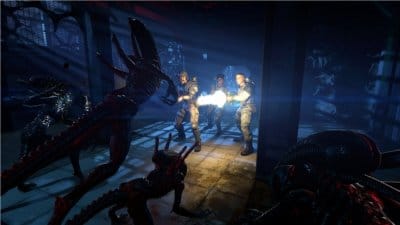