Knowing that Ripley is to feature in Alien Isolation, this will surely make it a worthwhile game and should finally change our perception of this game franchise. You don’t have too long to wait, as Alien Isolation will be released tomorrow, Tuesday, 7th of October, although we have heard that people have already got their hands on a copy early, much like FIFA 15 in that respect.

If you are considering the game, but uncertain where to buy it from, then we explain how the Alien Isolation price at Tesco compares to Asda, Sainsbury’s and also GAME. Tesco’s is asking £32 for the Nostromo Edition on Xbox 360, PS3 and PC, and £47 for the Xbox One and PS4.

However, if you purchase an Xbox One console from Tesco, you will receive a free copy of Alien Isolation, although this offer only runs until the 21st of this month. 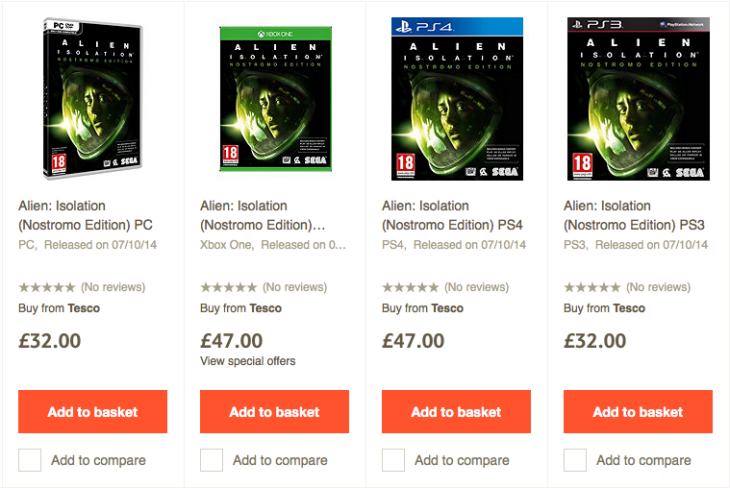 Alien Isolation Nostromo Edition price at Asda is a fraction cheaper, as they want £32 for previous-gen and £45 for the new generation versions.

While you cannot order games online at Sainsbury’s anymore, we did notice on our trip to the supermarket this morning that they already have Alien Isolation on the shelf. The price for the game in store is £32.99 on last generation and £42.99 on current-gen. This must be an oversight on Sainsbury’s part, and they could end up taking them down today, so you best hurray to see if your local store has the game a day early.

Finally, GAME is a more expensive, although that is because they are selling Alien: Isolation Ripley Edition, which is exclusive to them. Prices are £36.99 for the Xbox 360 and the PLayStation 3, and £52.99 for the Xbox One and PlayStation 4.

Where will you be heading to get your copy of Alien Isolation, and do you mind paying extra for the Ripley Edition?