During the Holiday 2013 period, we enjoyed giving you lots of information on a series of budget tablets. These included the RCA tablet lineup, which proved to be a big hit with consumers. Now though, as we enter the new year it looks like new budget contenders are on the horizon.

Specifically, one of these is the Alcatel One Touch Pop 8 tablet. It has just been announced at CES 2014 and could turn out to have the same success as RCA by having the ‘budget tablet’ tag attached to it.

Although the Alcatel One Touch Pop 8 tablet price is not live yet for US and UK markets, we have a feeling that this could be a very popular device once it’s available to buy. Specs of the One Touch Pop 8 include a 8-inch display, with a 1280 x 800 resolution that obviously isn’t full HD.

In other areas though it’s more pleasing, with a quad-core Cortex A7 1.3GHz processor and 1GB of RAM. There’s only 4GB of memory on board, but the option to expand this further with MicroSD support. There is two cameras on board too, with a 2MP rear shooter without flash, and a 0.3 megapixel camera on the front for very basic web chat sessions. 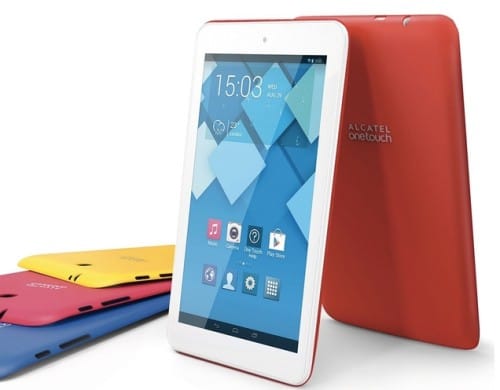 It goes without saying that these are not amazing hardware specs, but the design is lovely and if this tablet ends up being close to $100 – you are going to be very interested in picking one up we feel, especially with the quad-core processor in tact.

The One Touch Pop 8 runs on Android 4.2.2 Jelly Bean, but features the One Touch UI on top. It’s also going to be one of the thinnest 8-inchers on the market, weighing in at just 325 grams.

The guys over at PhoneArena were on hand at CES 2014 and managed to provide us with an initial One Touch Pop 8 review. You can read about this here, while a more condensed overview of this tablet can be seen in the video below.

Do you agree that this tablet has the potential to be great as long as the price is between the $100-150 mark? Anything higher than that and you may just want to pick up a Nexus 7 instead.