There has been a brand new Advanced Warfare Xbox One update on March 3 today. It has been live for around an hour and is just over 1GB in size.

For those that are looking for the PS4 update, we can confirm that Sledgehammer is hoping to deploy the update today ‘if all goes well’ – meaning that it may be being held up by Sony’s certification process.

Meanwhile, we can see that everyone is looking for the new AW update notes but as far as we’re aware Sledgehammer is yet to post them on their forum. 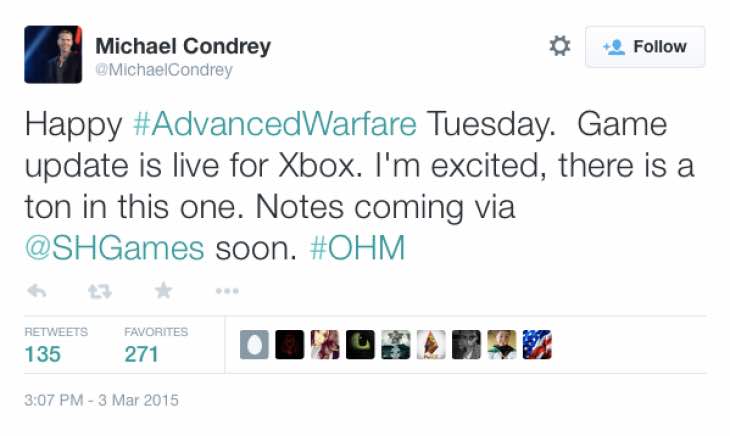 It’s a bit surprising given that the update has been available for an hour and we would have thought that SH Games would have prepared the Advanced Warfare patch notes on Xbox One in advance – no pun intended.

Nevertheless, when they do go live – you will find them at this link. We can tell you though that it looks like there has been a ASM1 nerf, as one of the key changes.

We told you about 15 weapon balance changes that were coming in this update and the ASM1 Strider nerf looks to be one of them – according to early feedback. Elsewhere, the Grand Master additions will be live in this update as well as Gun Game leaderboards for those that are looking for them.

As we wait for SH to post the full AW patch notes on March 3, help us out by listing what you have noticed different in the game so far. SH Games has confirmed that the 15 weapon changes are live with this update, so what other weapons tweaks have you spotted?