It looks like Sledgehammer Games have had enough of certain Advanced Warfare players, who are playing online multiplayer with certain gameplay styles that are different to standard play.

More specifically, we can see that bans have been handed out for Advanced Warfare trickshotting – one of the current trends in the game where players are flying through the air, performing spinning kills just for bragging rights.

It turns out that Sledgehammer may not like this after all. Michael Condrey, studio head at SH Games recently posted a detailed statement offering thoughts about the current state of online multiplayer. 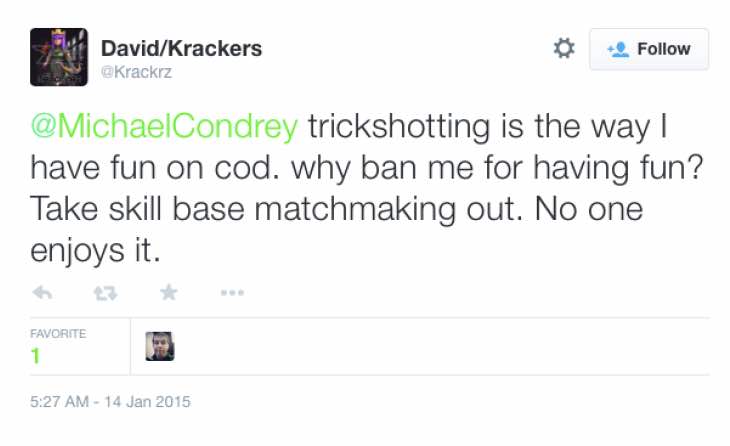 He referenced that the team are well aware of the Advanced Warfare Reverse Boosting that has been going on, going as far to say that they will increase their efforts to ban players on sight whoever is caught doing it.

In the same statement, Condrey seemed to say that trickshotting in the game was ok, as you can see from a quote below:

“No one is trying to restrict the fun factor of playing Advanced Warfare with this policy, nor are we actively banning against particular styles of play, like trick shots.”

With that in mind, we’ve received some messages recently from players who have said that they have been banned specifically for trickshotting – You can see discussion on this by viewing incoming complaints here.

While some players have said that they have been banned, we can also see that some players may be mistaken in thinking that SH Games are handing out bans solely for trickshotting.

Reverse boosting is the real problem here and if you are just out to spoil other people’s fun in the game – expect to receive a ban for it, it’s quite simple.

The question is, have you been banned over the last few days due to trickshotting, or do you think that some gamers are overreacting and using it as an excuse to complain when Reverse Boosting is the real issue?

Give us your thoughts on this – is it unfair to ban players just for trickshotting or not? We’ve also added a video below for you to watch below which discusses this subject in more detail.