Hours ago we told you that a new Advanced Warfare update had gone live on Xbox One and Xbox 360 platforms. Now, we have some information for those of you who are now waiting for the Advanced Warfare PS4 update 1.12 to land.

This should be the next update to happen on PS4 and will be the same update that Xbox One users have just received. Unfortunately, it’s again being delayed on PS4 for some reason, with Sledgehammer saying that it is down to Sony and their ‘1st party approval’.

In the meantime though, we can give you a heads-up on potential AW 1.12 update notes as Sledgehammer has just revealed the Xbox One notes on the forum and the same update will apply to PS4 and PS3 gamers. 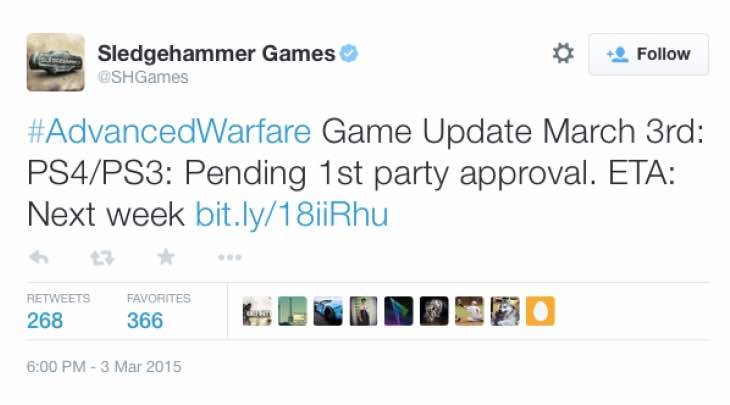 Key changes include the Grand Master Prestige content, but more importantly – a total of 15 weapon balance changes, including tweaks to the ASM1, PDW and the S12 which now has increased damage.

You should also be happy to hear that SH Games is finally adding a leaderboard to Gun Game, while there’s also another new wave of map exploit fixes that have been issued as well.

Check out the link to the forum above for a glance at what is coming in the next PS4 update. Are you a little bit disappointed though that Xbox One gamers are getting game updates first, on top of DLC?