We were just about to go online on COD Advanced Warfare on PS4, but unfortunately we have been stopped in our tracks, due to a new error which reads ‘Server is a different version 1.14’ on PS4.

This is highly frustrating as it is happening just as we are about to start a game. It’s strange as it seems to have happened out of the blue – a few hours ago it was fine, but now we can’t play AW online on PS4.

So far there hasn’t been any word from Sledgehammer regarding the AW server problems on March 18, but we can already see that plenty of other gamers on PS4 and Xbox One are having the exact same problem. 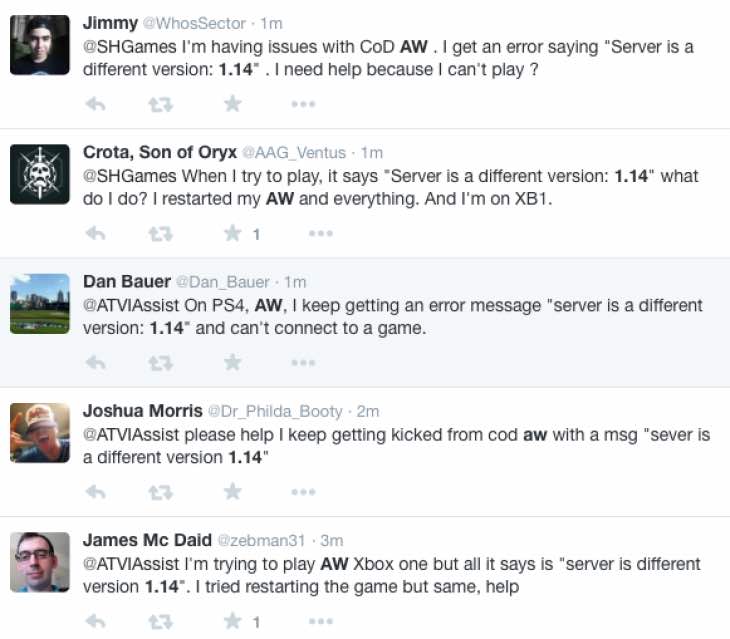 If there is a AW different server version to 1.14, then we definitely haven’t seen it released yet. As far as we’re aware, all PS4 and Xbox One users are on 1.14 as the update arrived one week ago – patch notes here if you missed them last time.

Sledgehammer needs to fix this as soon as possible, although we’ve heard that the AW server different version 1.14 problems on PS4 and Xbox One may be restricted to USA gamers only – as some are connecting just fine in the UK.

As we look for an official update on this for you, give us your AW server status right now. Are you getting the exact same thing when trying to connect to a match online?