It has been a long time in waiting, but thankfully we are almost there. It’s time for Xbox owners to get their first taste of Advanced Warfare add-on content, as we look ahead to the Advanced Warfare Havoc DLC release time for PST, EST and GMT timezones.

As far as we’re aware, Sledgehammer has given no indication exactly on when the first piece of content will be available. We can see that many users are already bombarding the personal Twitter accounts of Michael Condrey and Glen Schofield for information on when the pack will be out.

However for the moment there has been no heads-up. What we can do though is give you an estimation of when the Havoc DLC release time in UK and US could be, based on previous trends.

If Sledgehammer are on a release schedule from Activision and plan to launch their packs at roughly the same time as Infinity Ward and Treyarch, then we can offer some useful information at the very least. 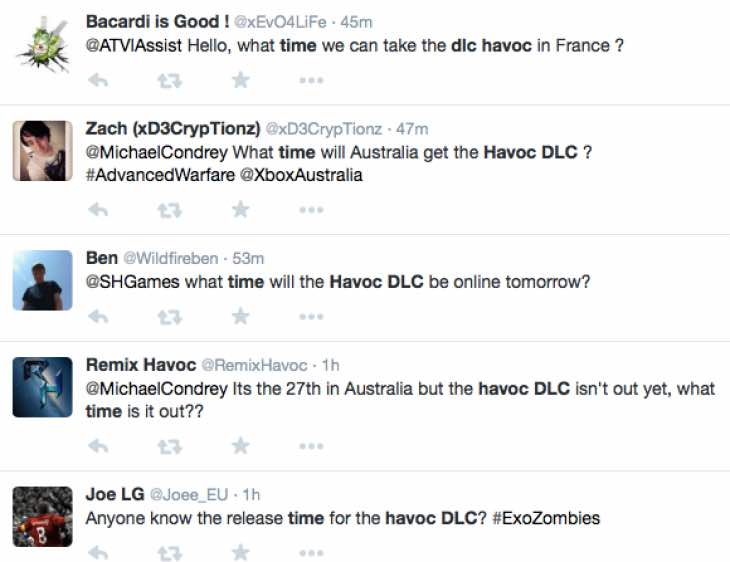 We told you in the past that content for COD Ghosts released at around 1am Pacific Time, 4am Eastern Time and 9am in the UK – as a rough guideline.

When looking back at the Devastation map pack release for Ghosts, the content arrived just after 1am Pacific Time and so did subsequent content releases.

Obviously we can’t guarantee that Havoc will follow the same pattern as it’s the first map pack from a brand new developer. It does however give you a heads-up that you will probably need to stay up past midnight if you plan to download Havoc the minute it is live.

We’ll update this if we hear anything from SH Games regarding the set time. In the meantime, let us know your last minute expectations for the content – remember, live on Xbox One and Xbox 360 first only.

Which map are you looking forward to playing the most, multiplayer or zombies? Let us know when you are downloading on your time zone and the file size to give everyone else a heads-up.

UPDATE: A GameStop listing for the DLC suggests that the content will be out at 11pm CST on January 26. This is for digital copies, but if it is also talking about the general release then we could see the content become available at 9pm Pacific Time on Monday 26, 12am Eastern Time and 5am for everyone in the UK (Tuesday morning).

If this information is true, then that is the earliest time that we have seen for a new COD map pack release so far. In other words, the content may be coming in around three hour’s time!

UPDATE 2: Ok, GameStop is confusing things for everyone it seems. Glen Schofield has just put this out on Twitter.

1AM relates to PST, meaning that our original estimations in the article above were correct. SH Games are obviously the ones to believe rather than Gamestop, so as it stands – Havoc is out at 1am PST, 4am Eastern and 9am GMT.

UPDATE 3: Havoc should be live for most of you now. We wrote in a separate report that the file size is 6.73GB. Have fun with zombies everyone and let us know how you get on.