If you decided against picking up Call of Duty: Advanced Warfare at launch, Activision is now coming right back at you with a new incentive to buy.

The Advanced Warfare Gold Edition for Xbox One and PS4 is the standard game but comes with the bonus of the Havoc DLC pack.

Havoc was the first DLC expansion released for Advanced Warfare, which originally cost $15 to buy outside of the Season Pass. It features four new multiplayer maps, plus the first Outbreak Exo-Zombies map too – so it’s a decent offer for sure. 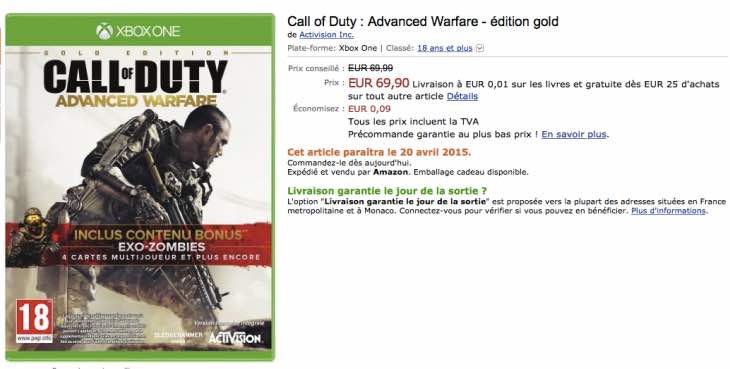 Both versions have been listed on Amazon France, along with a release date of April 20. So far, we haven’t seen confirmation of the Gold Edition coming to US and UK – but after this we don’t think it will be too long until we get the announcement.

Are you interested in this? It’s worth pointing out that the Advanced Warfare Gold Edition price is set at 70 Euros – that’s 10 Euros more expensive than the standard edition of AW at 60 Euros, which gamers usually pay for new games.