The COD Advanced Warfare Exo Zombies story continues with Infection in DLC 2 Ascendance. Within Part Two, the next episode of AW Exo Zombies focuses on the heroes after they awaken in the town surrounding the Atlas research facility.

Following the outbreak, within this new Infection map you will need to fight your way out to find answers and progress through the Ascendance DLC story. The town has been mutated due to the infection, so you will need to use locations within the expanded co-op map. 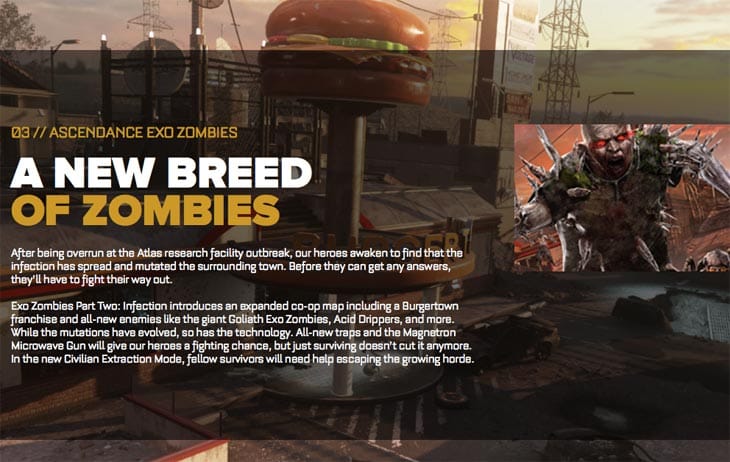 Advanced Warfare Ascendance Exo Zombies Part Two – the next part of this story will introduce some new enemies like Acid Drippers, Goliath Exo Zombies, and other yet to be revealed all-new enemies. They are further enhanced by both mutations and technology, so you will be helped by a few upgrades yourself, which include the Magnetron Microwave Gun and new traps.

There’s also a new Civilian Extraction Mode that survivors need assistance to get away from the growing horde of zombies. The Infection map within Ascendance DLC 2 takes everything to a new level, but are you ready for it? If so, and you’re on Xbox then you can get hands-on in just under 2 weeks.