We are slowly counting down towards the highly anticipated Advanced Warfare Exo Zombies release date in January. Before that though Activision has released another teaser, showing off some brief glimpses of new Advanced Warfare Zombies gameplay, including the confirmation of a brand new feature.

We know that the new mode will arrive in January with the Havoc map pack, but so far Sledgehammer and Activision have refused to offer a set release date – presumably as the content is still in development.

The latest teaser for the game is fantastic though. Now we know that the four Advanced Warfare Exo zombies characters will be voiced by celebrities, similar in the way to Treyarch’s Call of the Dead zombies and of course following on from the inclusion of Kevin Spacey as a main character in the campaign mode. 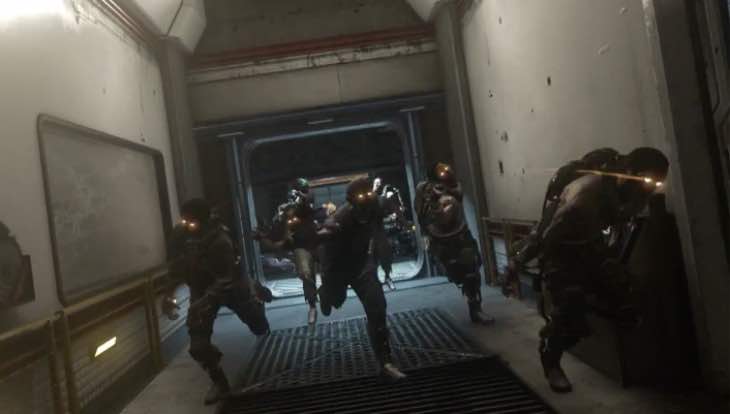 The four actors playing the parts are none other than John Malkovich, Bill Paxton, Rose McGowan, and Jon Bernthal. Their specific roles have not been revealed yet but we’re guessing we will find out during the next reveal.

What we wanted to focus on though is the confirmation of zombies that will have the ability of flight thanks to jetpacks. Pause the clip below at the 0.35 second mark and you will be able to see the zombies jumping to reach higher levels of the map.

This creates a whole new different gameplay mechanic of course and looks like it is going to be bad news for those that thought that Sledgehammer’s zombies would be an easier ride compared to Treyarch’s.

We can’t wait to see what the next gameplay will show, hopefully some new Advanced Warfare zombies weapons and perk machines. Give us your reaction to the new teaser and the fact that zombies will now be able to use jetpacks to reach different areas of a map more quickly.