We have told you before about the popularity of eReaders and how sales of eBooks had grown in the US. The Amazon Kindle is the market leader in dedicated eReaders, and last month saw the launch of a cheaper ad-supported Amazon Kindle. This version of the device is proving to be the most popular.

George Wong from Ubergizmo is reporting that the ad-supported device is currently the best selling version of the Kindle. This is according to Amazon’s best selling list, and despite only being available for a short time.

Consumers must like having the extra $25 to their name and may not seem much, but to some it obviously does. It will also buy you a few books to get your collection of eBooks up and running. The ad system by Amazon has been pretty well thought out, as it doesn’t interrupt owners reading experience. The ads only make an appearance on the home screen and never in the actual book itself. 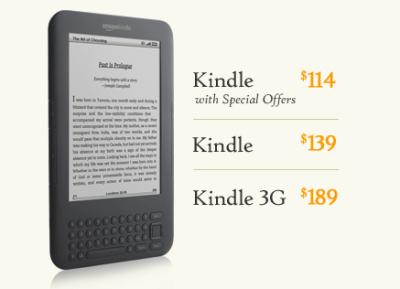 There has been talk of a Kindle successor, so prices for the Kindle device may drop even further eventually. Have you purchased the ad-supported Kindle? Or would you ever consider it?