We have seen HDTVs and now gaming consoles taking the leap into the 3D world of technology, and today Acer have announced two new 3D desktop monitors.

Sean Portnoy over at ZDNet is reporting in an article that the new HN274H supports Nvidia 3D Vision which is ideal for computer gaming, but also has a 3D HDMI port. This will allow you to connect up a compatible Blu-ray player or set-top box.

The HN274H is a 27-inch LED backlit display, and has another two HDMI ports along with a set of Nvidia active shutter 3D glasses. This cool looking monitor will set you back $689, and is available now. The other new model announced is the 23.6-inch HS244HQ. This doesn’t have the LED backlighting or the Nvidia 3D Vision support. 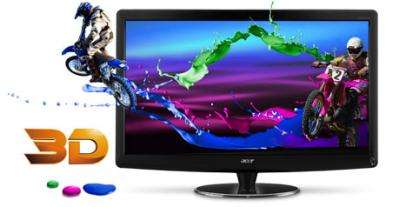 Do you like the idea of a 3D desktop monitor?