While most of the tablet PC talk of late has been about the iPad 2, there is still some worthy devices becoming available. Acer has announced today the US pricing and release date for its Android based Iconia Tab A500.

The tablet which will run Androids 3.0 Honeycomb OS has just been released for Preorders at Best Buy, with in-store pre-ordering beginning on April 14. It will actually go on sale on April 24 according to a report by Damon Poeter of PCMAG.

Priced at $500 the Wi-Fi enabled tablet PC is powered by Nvidia’s 1-GHz Tegra 250 Cortex A9 dual-core chip. It has 16 GB of storage and 1 GB of memory. Acer has stated the tablet will come preloaded with a couple of neat games, Let’s Golf and Need for Speed: Shift.

Owners will also get Google Books, eReading apps for eBooks, LumiRead, and Zinio reader for digital magazines. The new Acer tablet weighs only 1.69 pounds, and is only half of an inch in width. It also has a 5-megapixel camera round the back, with a 2-megapixel shooter on the front. 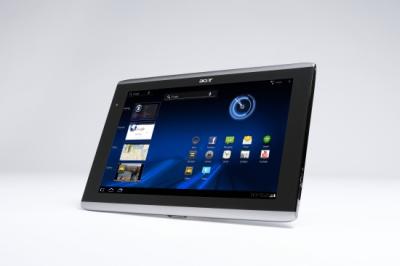 There is the ability for sharing HD video with other devices via its HDMI port, and Acer says the device can achieve an impressive ten hours from the battery if it is used just for web browsing. The Acer Iconia Tab A500 is an impressive looking device, but can it compete with the iPad?