Back on November 23rd Acer held a press conference called Interact where they announced a new laptop / Tablet PC. It is called the Iconia, with the rise in touch screen technology on the likes of the iPad and the Samsung Galaxy Tab, Acer now want to come in on the action.

We have spoken to you about another recent dual touch screen laptop in the Taiji model but how does the Iconia compare? Let’s have a look at the specs of the device and then we can tell a little more. The Iconia obviously has 2 displays at 14” both full touch screens, it has 4GB DDR RAM, 750GB HDD, 1 USB3.0 port, 2 USB 2.0 ports and Windows 7 Home Premium. It also has an Intel core i5 processor.

Naturally with a device like this people will look at the specs and they are not too shabby, but the real selling point to this device is its intricate innovative style that it brings. It has something a little different in its core functionality that is shown in the video clip further down courtesy of CNET.com.

One of the things that interested me was the way the keyboard is thrown up onto the base screen, you put both of your hands on the screen so all 10 fingers and both palms then the keyboard appears as if by magic. It actually recognizes your hands both being placed on it. Now that is cool. It also has another function of when you put one hand down in a similar fashion it brings up what is described as a media wheel and is shown below. 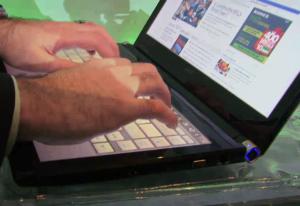 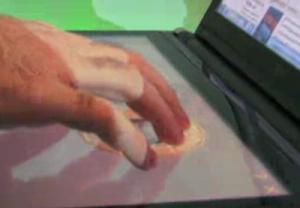 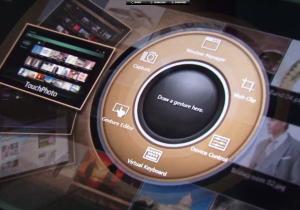 If you missed the conference then don’t worry, you can view some of the clips here. You can expect to pick one of these devices towards the end of December or early in 2011. Acer also showed a new Tablet PC which currently doesn’t have a name or a price associated with it. The tablet will run on the Android platform working with NVIDIA’s Tegra which you can learn more about here. You can see a picture below of the new tablet, 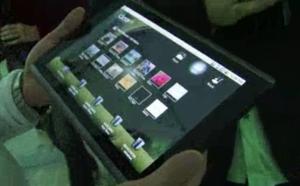 What do you think of Acer’s latest creations? Let us know in the comments below.