We have a word of warning for those that are considering buying the Acer ES1-5311 laptop at Tesco this month during the reduced price sales.

We can see that the Acer ES1-5311 laptop specs are very good for the asking price, with this model in particular coming with an Intel N3050 Celeron Processor, 4GB of RAM and a 1TB hard drive.

There is another variant of the Acer ES1-5311 which comes with a Pentium processor and Windows 8.1 instead, but this appears to be an upgraded model which ships with Windows 10 out of the box.

What we wanted to point out though, is that this is a laptop with a dual-core processor not a quad-core processor which Tesco are misleadingly advertising it as – as seen above.

The Intel Celeron N3050 processor only has two cores, rather than four so we just wanted to make that perfectly clear for the unassuming consumer who will buy under the impression that it is quad-core based. 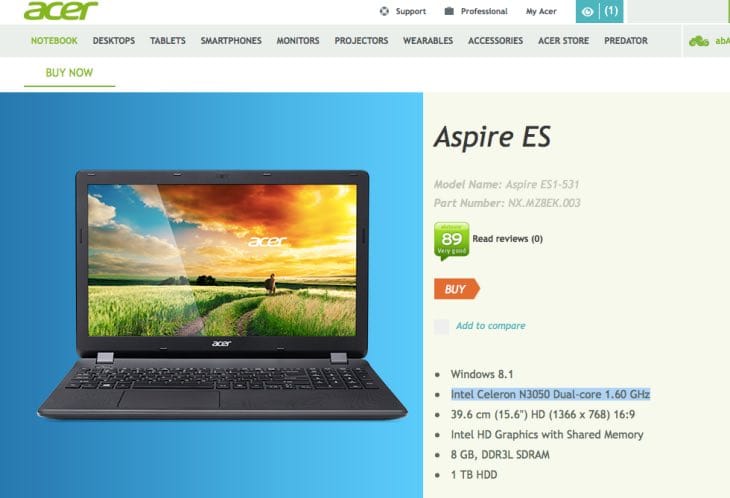 Acer themselves list this model over on Amazon as well as their official website and you can clearly see in the product description that two processors are listed – so it is not a quad-core chip.

With that said and done though, it is still a very solid laptop. Other features include a HD display, HDMI port, Intel HD graphics, one USB 3.0 connection, two USB 2.0 ports and up to 5.5 hours of battery life.

Unfortunately, as this is a new model for 2015 there are no Acer Aspire ES1-531 laptop reviews online yet. However, we do have the product manual download (direct link) for anyone that would like a further look at what this laptop offers.

Let us know your thoughts on the specs and what you think of Tesco advertising it with a quad-core processor when in reality it is a dual-core laptop – a big deal to you or not?