There may well be plenty of alarm applications to choose from on the Apple App Store, but I don’t think any sound as fun as the recently released A!arm app for iOS devices. Rather than having to reach out to physically turn the alarm app off, users can control it with their voice instead.

As Gerald Lynch over on the techdigest.tv website recently reported, A!arm is more than just a simple alarm app, as it also features a wake up test — which throws a simple math test at you every morning to make sure you are truly awake — and a sheep counting game for those that find it hard to drop off.

The app’s co-creator Martijn Verpaalen recently claimed that although they know that waking up will never be fun; they have tried hard to make it that way. As noted on the itunes.apple.com website, the A!arm app is compatible with the iPhone, iPod Touch (2nd, 3rd and 4th generation) and the iPad. 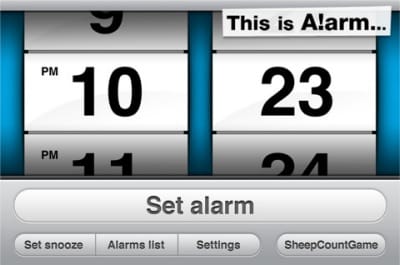 The app — which is currently available to download for just $0.99 — also enables users to tell their Facebook friends and Twitter followers when they get up. Other features include the ability view and edit all your current alarms in a list and the option to choose what days you want your alarm to repeat. 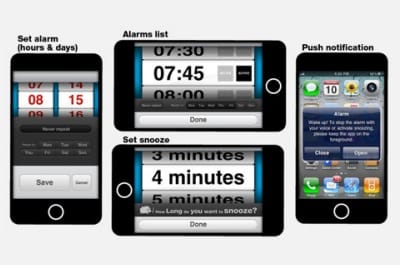 Users have the option of a 12 or 24 hours clock, as well as the option of setting how long they want to “Snooze” for. Feel free to let us know what you think of this app if you decide to download it.