If you really enjoyed playing A Kingdom for Keflings when it was released onto Xbox Live Arcade back in 2008, then you might like to know about its sequel, A World of Keflings. NinjaBee Games has just announced its release date, and we can now tell you that it will be arriving on December 22nd.

According to a recent article by Lindsey over at worldofmeh.com, the developer also revealed a price for the upcoming title, and how A World of Keflings is going to tie in with another two games — Raskulls and Ilomilo – that are being released during Microsoft’s “Games for the Holidays” promotion. 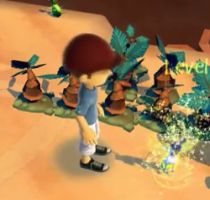 The game will cost you 800 Microsoft points, which is fairly reasonable considering some XBLA games require 1,200 MS Points. You may now be wondering how A World of Keflings ties in with the other two titles that I mentioned above, and that is what I was getting around to explaining next.

If you purchase either ilomilo or Raskulls, you can actually build houses for characters from those two games within A World of Keflings and have those characters live in them. What’s more is that it also enables you to dress up Ilo and Milo in Kefling costumes and play as a Kefling in the Raskulls game.

You can read more via worldofmeh.com. Will you be downloading A World of Keflings when it gets released on December 22nd?