ViewSonic has released specs and details for the 7-inch ViewPad 7x during Computex, and it is seen as a world’s first. The reason for this is due to the fact that it will be the first 7-inch tablet to run on Google Android 3.0.1 Honeycomb. The jury is still out about a tablet device this small compared to the larger model; the Galaxy Tab has done ok, but has not set the market alight.

So what can you expect to find hiding away inside ViewSonic’s new and little tablet? The first thing that you will find the Tegra 2 dual-core processor, two cameras, HSPA+ connectivity all packed away in a lightweight design. We are not sure on a release date or price, but we hope to learn news on both soon.

Going back to what we believe is the most important feature, the new Google Android 3.0.1 OS will allow the tablet to make full use of all the apps on Android Market. There are a number of updates to this version, which seems to work quite well with ViewSonic UI and its exceptional 3D menus. 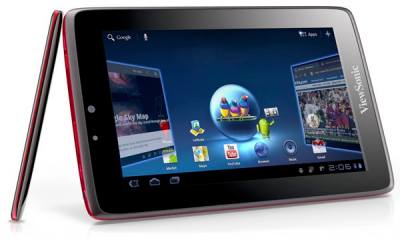 While doing some further digging, we have learned from Good E-reader Blog that ViewSonic expects to sell the ViewPad 7x for around $429. The first model is expected to be launched as a Wi-Fi version in July and a 4G model in the Fall of this year.