It is not easy trying to keep things under wraps sometimes, and this is especially the case with certain retailers that mistakenly let products sell early. The 32GB Nexus 7 tablet is one such device that has been sold before the expected release date, and for Staples this had been an official launch for Google’s 32GB Nexus 7 on Oct 29.

What do you do if you’re one of the first people in the world to purchase the 32GB Nexus 7 tablet? You tell the world of course by uploading an unboxing video to YouTube, and sending images to some major technology websites. The person that purchased the new Nexus 7 tablet did in fact create a hands-on video, which can be seen below this article and runs for just under 3-minutes with a description that states “proof of existence“.

Previously we had only heard rumors pointing to a Nexus 7 tablet with 32GB of storage, which a number of sources claimed it would make an appearance at the Google event in 8 days time. This popular blog received a few photos from the person that purchased the new Nexus 7 at a Staples store before the official release date, and they even sent a receipt as additional proof. You can see the retail receipt in the image below, which also shows the “Nexus7” product number and main specs. 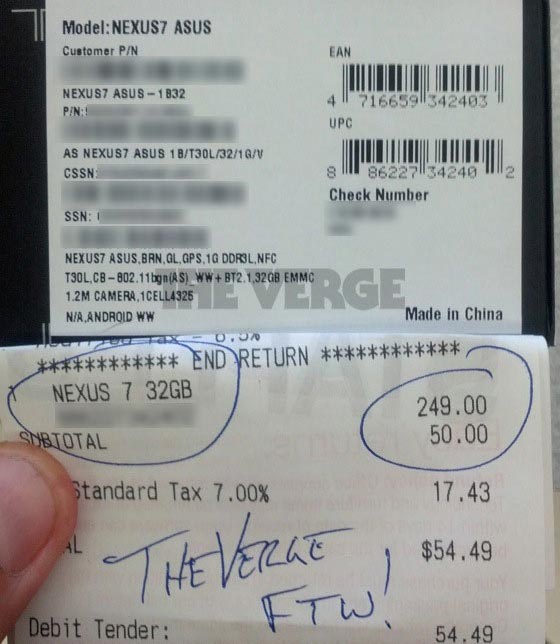 Are you interested in the new option of Nexus 7 with 32GB of storage? This early sale proves a number of things like the just under $250 price point for a 32GB Google Nexus 7, which is the same cost as the current 16GB model although we’re hearing that this model will drop $50 in price when the 32GB is released. It is worth noting that the 8GB model is reportedly being discontinued at Staples.