We have an important reminder for NBA 2K15 players now, as the 2K servers are down today on July 8 for scheduled maintenance.

The main problem that we can see however, is that 2K has not said when NBA 2K15 servers will be back up. This is rather strange as usually when these games go down the developer would at least give their customers a heads-up as to when they’ll be able to play again.

The fact that 2K hasn’t done this hopefully suggests that the maintenance on July 8 won’t last too long and we’ll be talking about within an hour rather than several hours. 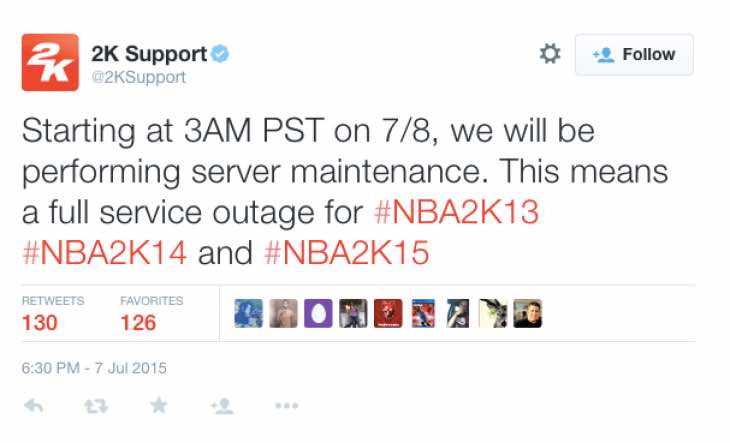 The Tweet above confirms that the NBA 2K15 online server maintenance on July 8 is a ‘full service outage’, also affecting NBA 2K14 and NBA 2K13 as well.

Additional information on 2K’s website also suggests that WWE 2K and Evolve servers on July 8 will be impacted as well, but won’t be as severe as the work on NBA 2K15.

Let us know if the 2K servers are down today for you right now in your area, and if you agree with us in saying that it is strange that 2K hasn’t mentioned a time for when NBA 2K15 will be back up.