While we await our time to review the 2017 Smart ForTwo Cabriolet, we thought we would take a look at what one of the big auto websites has been saying about this, fun, new model. It’s obvious that this small vehicle is not going to have the same sort of driving experience as some of the larger cars, but then again, you know what you are getting when you go for this particular vehicle.

There is no denying how cute the 2017 Smart ForTwo Cabriolet is, and is just the same as its hardtop sibling – well all apart from the roof that is, and so you know what you are getting.

However, by getting rid of the roof it does add a further dimension to the small, fun ForTwo. One thing that does confuse us though, and that is the bad timing of its release, which is said to be at the end of next month. The cold weather will still be affecting many of the key markets this model is being aimed at, although that could also be a good thing, as that way the carmaker will be able to keep up with demand at this early stage. 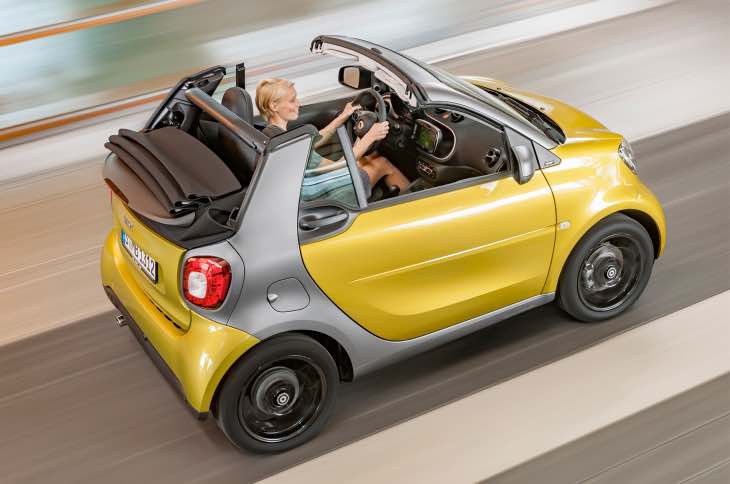 Autoblog has spent some time with this new variant of the ForTwo and while they are overly positive, they have pointed out a few drawbacks. The main one is to do with its soft roof, because once retracted to its fully-open position the visibility is very poor. This means that the rearview mirror also has no purpose, although in their wisdom Smart has added a back-up camera, the same of which is part of the optional navigation head unit in the hardtop model.

The cargo space was already limited, and so the Smart Cabrio roof panels cut into what little space there is. Then there is the biggest issue, the roof mechanism adds an extra 200 pounds to the overall weight of the car.

Like we said above, we hope to be getting the convertible version of the ForTwo soon, and so we will be able to offer our very own verdict.