There has once again been talk about the 2016 Hyundai Genesis G90 UK release, although not in the positive sense we are afraid to say. During its reveal, the South Korean carmaker has once again confirmed that the new model will only be available outside of Europe.

However, we can take one positive from this, and that was how Hyundai said the new Genesis G90 will not be sold in Europe at this time, and so we can only assume there could be plans at later date – or so we are led to believe.

Back to the 2016 Hyundai Genesis G90 reveal, which is known as the EQ900 in Korea; this is the first of six new Genesis models and will be offered with a choice of three petrol engines. These will be the 3.8-litre V6, 3.3-litre twin-turbocharged V6 and a 5.0-litre V8, each producing 315PS, 370PS and 425PS respectively. 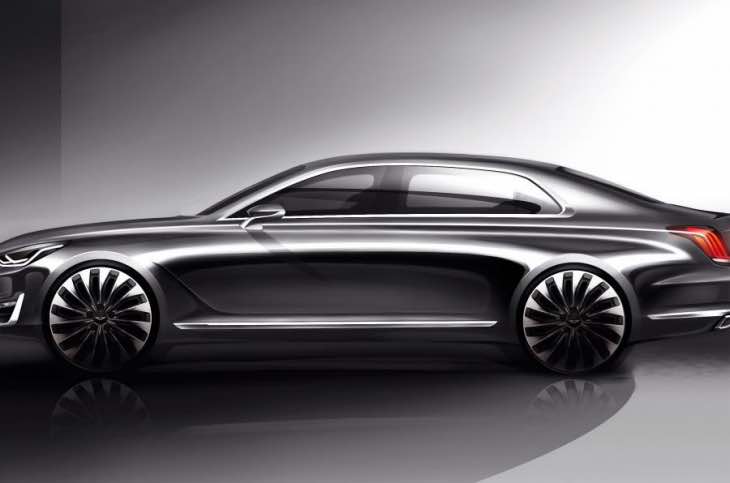 All these engine options will come with rear-wheel drive, although there will be an option to upgrade to an all-wheel drive system. However, there will not any transmission options, as you have just an eight-speed automatic.

The Hyundai Genesis G90 performance is not known for all models, although we can tell you that the V8 engine option will get to 62 miles per hour from a standstill in 5.7 seconds, which is very respectable for such a large car.

In terms of exterior styling there is that large grille and sharper lines than the outgoing model. The interior is a place packed with the latest in technology, such as a 12.3-inch high-definition screen, three-zone climate control, 22 adjustments for the driver’s seat, wireless mobile phone charging and so much more; details of which can be found on the Hyundai News website.