The all-new Ford Mondeo is set to take on the Vauxhall Insignia from next month in the UK, and from what we are hearing, Ford has done a stellar job and so one would presume the battle is already won. However, you have to remember there are other cars competing in this market, and the Skoda Superb could very well be one of them when it goes on sale in autumn 2015.

The new Skoda Superb does have a few design tweaks that will make it a far better model, first of which is losing the controversial trademark dual tailgate, as there is now a more traditional boot, meaning its design can be more stylish. It is hard to make out many of the new design elements in the images, but we will get to see them up close in February.

Skoda knows it is not all about what’s on the outside, and the underpinnings need to be very good as well, especially going up against the upcoming Mondeo, which if anything likes its successor will be a class beater. The new Superb will see a 12 percent increase in torsional rigidity, and you will be surprised that there are weight savings of around 75kg, especially as there is at least 45 percent more high-strength steels used. 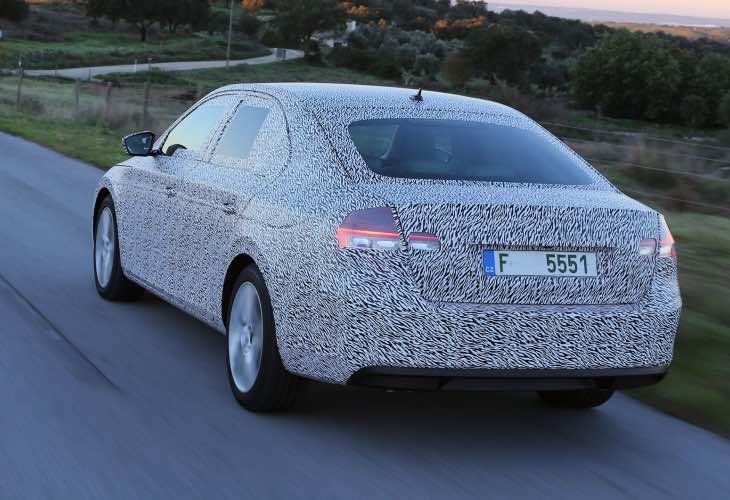 No doubt there will be a debate as to which of the three cars is the best, and that will be a tough one to answer, especially as they all bring something different to the table. However, we do know that Skoda will introduce new engine choices to try and entice you, but again, we know the Ford engine options will be strong on the Mondeo.

You might think that we favor the Mondeo more; it isn’t that, we are just going on the previous model where Ford seemed to come out on top. I now have a Mercedes, and there are times when I still wish the Mondeo was parked outside because there were several key areas where it was better, such as its heating and the ability to keep gripping on the grey stuff.

How do you think the 2015 Skoda Superb will compare to the all-new Mondeo and the Vauxhall Insignia?