We had assumed that the 2015 Hyundai Sonata would get its debut at the New York Auto Show next month, but a surprise unveil took place last night and offered an insight into the redesign. However, this wasn’t an official debut, and so this will still take place in April.

2015 Hyundai Sonata changes — are sophisticated when compared to the current model, and while there are not many changes to the interior, it is the exterior and the technology used that are of far more importance.

Going back to the interior, while the overall layout will remain the same, there are a few enhancements to help make it a more comfortable place to be. The addition of wood trim, heated leather seats as well as a few other new features.

Now onto the 2015 Hyundai Sonata exterior, which we already knew was going to feature new headlights thanks to a leaked image earlier this month. You will notice just how similar the front-end looks very similar to that of the all-new Genesis sedan, which isn’t a bad thing at all. 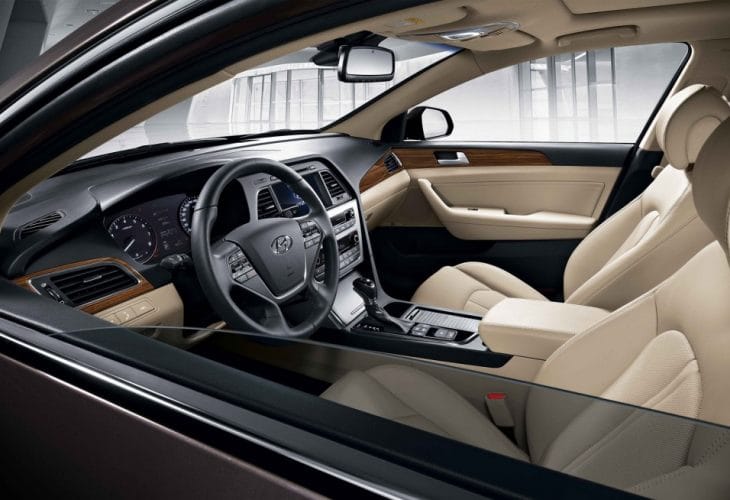 We can clearly see that Hyundai is trying to follow on from what KIA has been doing over the years, and make their vehicles a more viable option than German counterparts. They might be doing well in this area, but they still have a way to go.

Behind the scenes there are several new technological features to help the overall performance and handling of the 2015 Hyundai Sonata, with the current front-wheel drive system being revised, as well as enhanced suspension to help improve the ride. If that wasn’t enough, Hyundai has managed to increase the structural rigidity of the 2015 Sonata, making it much tougher.

2015 Hyundai Sonata engines and overall performance is still unknown to us, and so we ask that you wait until the car sees it debut at the New York Auto Show on April 16.