We have known for a while that BMW has been working in conjunction with John Cooper to come up with a truly remarkable model, and if you don’t believe us, then maybe a selection of new pictures will prove otherwise?

The very first 2014 Mini John Cooper Works prototype has been spotted winter testing in Europe and even though it’s hard to make out any discerning features, you can get a general idea of its basic design, although some interior shots would have been nice.

It’s worth noting that this is just an early test mule and so there are bound to be one or two minor design changes, although seeing as though the development program has gone this far, those changes will be very minimal. 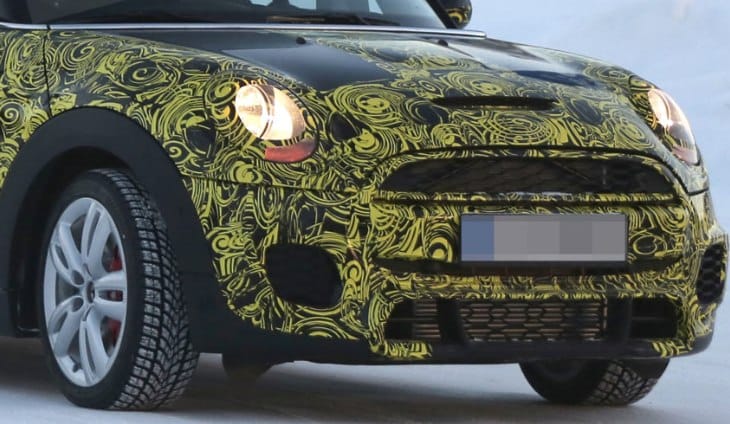 Another reason why we do not think there will be any major changes to its design is the fact that Autocar has been told by John Cooper Works that the new model is almost ready for production, which also means they have been pleased by these latest winter tests.

New Mini John Cooper Works performance — We already knew that BMW planned to give this new model some extra power, and with performance figures of 220 horsepower, 0 to 62 mph in 6.5 seconds and a top speed of over 150 mph, we can’t help but be impressed.

Some of the 2014 Mini John Cooper Works features include large brakes to handle the extra power, large air intakes and also 18-inch allow wheels to give it a more aggressive stance.

The Price of the Mini Copper JCW is expected to be about £23,000 with a release date suggested to be around the summer period.