Before Apple had updated its MacBook Air halfway through 2013, many of us had assumed that it would receive the Retina display upgrade. However, as time went on it was looking more obvious that this would not be the case, and so we have to look ahead until next year.

Looking ahead to the 2014 MacBook Air refresh there are fresh hopes that the thin laptop will receive the upgrade to Retina. However, it is not all about improving the screen because there are other areas that need focus as well.

2014 MacBook Air wish list — Some of the wanted specs and features are a little out there, not in terms of the technology, but rather the chances of Apple fulfilling them. 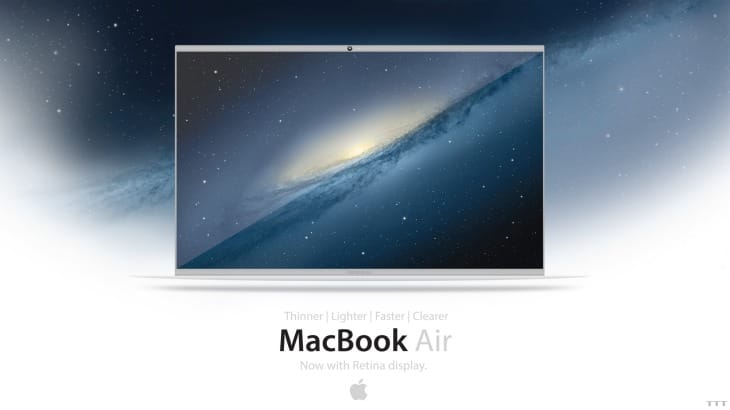 Sticking with the screen, we have heard from some of your readers that a touchscreen would be nice. This is highly unlikely to happen for two reasons, most Mac users are not interested in this feature, and also the fact that Mac OS X Mavericks does not support touch.

There was a recent rumor suggesting that the next MacBook Air could be a detachable device, much like the Surface. It is thought that Apple could use the A8 processor in a future Air, and while this does sound appealing to a huge number of Apple fans, this to is highly unlikely to happen.

Another feature that we could see is a different screen size, so instead of an 11 and 13-inch there could be a 12-inch model instead. We are not too certain how well received this rumor is, but we know that some people believe the smaller version is too small.

The MacBook Air has always been about the perfect balance of battery life, performance and affordability, and so these are the main reasons why Apple has to limit what changes are made with each Air update.

What changes would you like to see on the next MacBook Air?