So far in 2013 the Chevrolet Camaro has been the best selling sporty two-door car, but in May that model had to play second fiddle to the Ford Mustang. The former managed 7929, compared to the latters 8797. The nearest challenger (excuse the pun) to get anywhere close was the Dodge Challenger.

Overall sales for this year though still have the Camaro on top with 35,076, with the Mustang a close second with 33,868. One reason why sales of the Chevy were lower than usual has been blamed on the impending 2014 Chevrolet Camaro release, as we always know people are not willing to buy a car when a new model is looming.

Having said that, there are still those willing to bag themselves a bargain, as they know dealers will lower prices of the outgoing Chevrolet Camaro model to make space for the 2014 version. We expect this to be a recurring pattern just until the new Camaro is released, which we don’t expect this to happen until the fall this year. 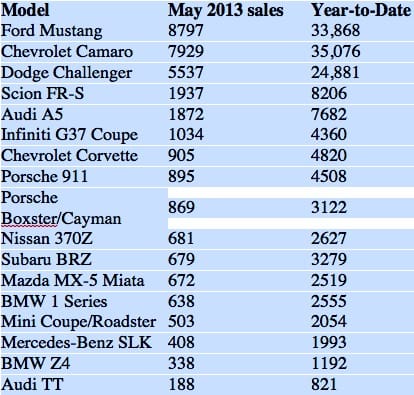 However, dealers are sure to offer all kinds of incentives for the current model, and there has even been a few critics saying people should stick with the 2013 model, as not much has changed with the new model, and so would be pointless to spend the extra money.

Don’t think for one moment that the 2014 Chevy Camaro will have all its own way, as the all-new Ford Mustang could spoil its fun thanks to the many changes planned.

While we like these muscle cars, if I had a chance to choose one of the best two-door sports cars from the list above, then it would have to be Audi A5, although the Porsche 911 is very appealing as well. Not only do they look nicer, but they will also outperform the Mustang and Camaro on a track around those twisty tight turns.