At the start of the week we saw the official unveiling of the 2014 BMW 2 Series, which is a coupe and replaces the 1 Series. Just a few days later the German carmaker had launched its configurator tool for the new model, offering you the chance to see the many options that are available to you.

Now that these 2014 BMW 2 Series configuration options are live it gives you the opportunity to see what upgrades are available and also how much they will cost you. Don’t expect these BMW 2 Series upgrade options to be cheap though, which you will see by playing around with the configurator.

There are two BMW 2 Series models available to you; one is the 228i and the other the more powerful and fun filled M235i. While we would like to say you should build your ultimate BMW M235i, it is more likely that more of the other model will be sold, and so you should have a play around and see how much the 228i would cost once you have made your upgrade choices. 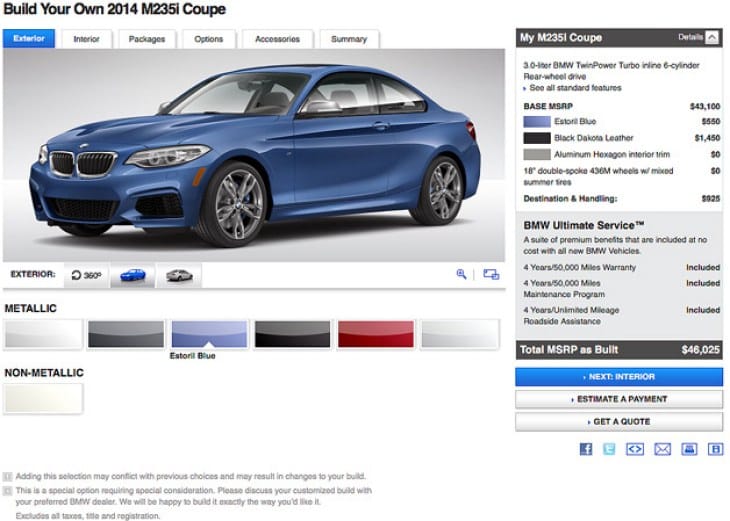 Starting price for the 228i is $32,100 plus $925 for destination charge, compared to a starting price of $43,100 for the M235i. It’s a huge price difference, but we all know what the M Division model gives you, such as more performance and improved handling.

In recent years the design of some of the BMW models have been questionable, but we have to say the new 2 Series is one of the better ones.