Whenever Land Rover release a new Range Rover you need to have eagle eyes in order to see the changes to the exterior, as they have the philosophy if it isn’t broke then don’t fix it. They are wise to uphold this value, but the car manufacturer does know that changes need to be made along the way; this is why we are pretty happy with the updates made to the 2013 Land Rover Range Rover.

Not only are there changes to the exterior but also to the interior, which we have to say is a delight because it doesn’t look so cluttered any more. Whenever you see a new Range Rover they never have mud or dirt on them because football/soccer players use them, rap stars and also rich women on the school run, which to us seems a bit of a shame. We say this becasue the Range Rover is one of, if not the best off-road vehicle in the world, and to see it all nice and shiny being driven on the road seems a bit of a waste.

However, Land Rover knows this, which is why they have made several updates in the design so that it feels at home on the road as it does off-road. Looking over the vital stats we have to say we are impressed, although there are vehicles like the SRT Grand Cherokee that offer more performance while having less power. The engine in the 2013 Range Rover is a 5-liter unit producing 510 horsepower and an 8 speed automatic transmission. The king of the SUVs will go from 0-60 mph in 5.1 seconds and reach a top speed of 140 mph. 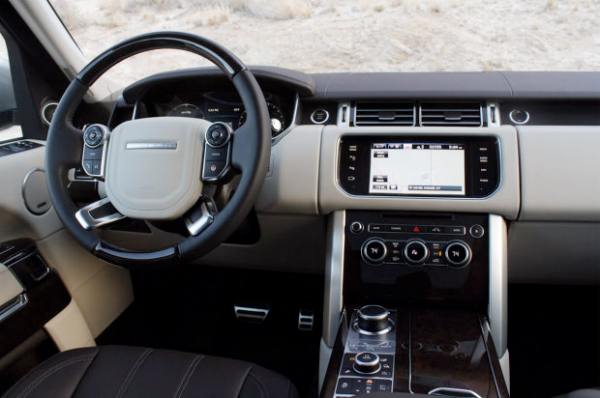 Going back to the interior (which you can see more of here) that we mentioned earlier, Land Rover decided that they needed to do away with almost half the buttons and switches compared to previous models. This is because at the center you’ll notice an 8-inch touchscreen display, which allows you to control many of the Range Rover’s features.

Another nice touch is the 12.3-inch TFT display, which is reconfigurable and allows you to change the look of the gauge cluster for different driving options. Overall the updates to the 2013 Range Rover are pretty impressive, although the $114,930 price is a huge issue for us.