Even though the latest version of the Mac Pro was released in late 2013, it has taken until 2014 for it to get its much needed security upgrade, and that is its Lock Adapter. This is not one of those third-party offerings, but an official one available on the Apple Store, meaning owners will have extra protection, even though it’s basic, for their prized possession.

The price of the 2013 Mac Pro Security Lock Adapter is $50, which is a small price to pay to give you more peace of mind. There is no need for a special tool to put this adapter on or remove it, but there is one bit of information you need to know before buying this new Mac Pro accessory.

You do not get a lock when buying this package, but we can tell you that it is compatible with many of the third-party Kensington (or similar) locks, some of which are also available on the Apple Store. 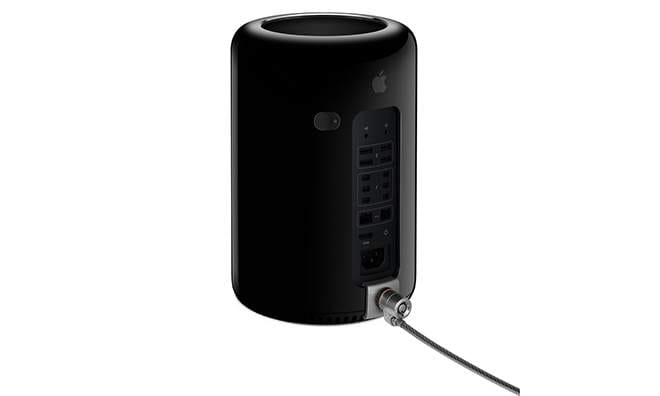 You will see in the image above that the lock attaches to the bottom rear of the Mac Pro chassis, and it does not impede access to any of the ports. However, with the lock in place you will not be able to gain access to the inner workings of the flagship desktop, adding yet more security.

Even though we said $50 is a small price to pay for the security of your Mac Pro, it isn’t when you consider just how small of a product this actually is, and we wonder how long it will be until some Chinese third-party accessory makers start ripping this off, and how cheap they will be?