The 2013 Honda Civic has a number of competitors that compete directly and top of the list includes the Ford Focus and Hyundai Elantra. It is also worth noting that the 2013 Chevrolet Cruze, Kia Forte and Subaru Impreza are alternatives as well.

We love the 2013 Honda Civic but you cannot doubt the driving ability of Ford’s 2013 Focus thanks to amazing handling with a comfortable but firm ride. 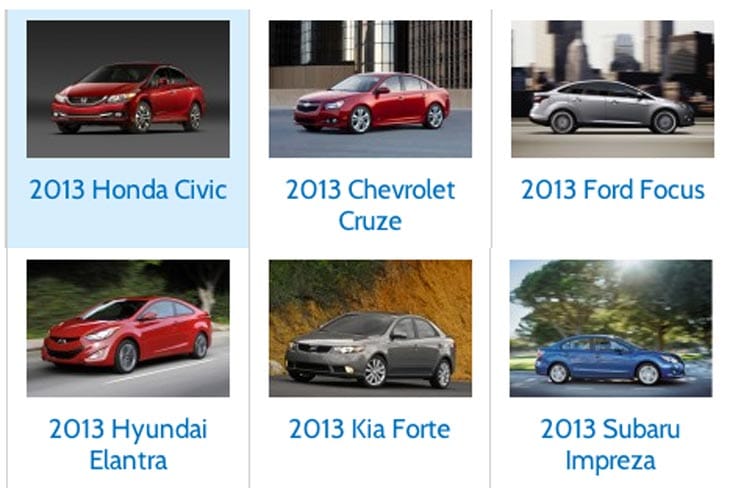 Check out this page that features a breakdown of the main specs for each car, the ratings, price and other information. All the key information is contained on one page that makes it easy to compare the models.

2013 Honda Civic review – We have also featured a number of videos within this article, which take a look at each of the cars from different perspectives. The first video above features the 2013 Honda Civic and this visual review runs for just under 15 minutes, which also contains a test of the exhaust, a walkaround and test drive.

The reviewer explains that Honda’s 2013 Civic has been pushed back into the top 3 compact vehicles thanks to fresh styling, excellent fuel efficiency, sporty driving dynamics and generous standard equipment.

2013 Ford Focus review – above you will see two more videos, the first features one of the best compacts from Ford and in the 12-minute review you’ll see a walkaround of the vehicle and a test drive. The 2013 Ford Focus is a cheap commuter car that’s economical, simple and hard to find a fault with. We also included another video featuring an in depth test drive of the Ford Focus ST for those that want something a lot more sporty.

2013 Hyundai Elantra review – finally, we have an in-depth video review of the Hyundai Elantra Coupe SE that takes you through a start up and good look inside. You will also see another video above that delivers a test drive of the GT manual version.