April 2010 was when we got our first images of the Mini Coupe, and only now have we started to see the upcoming 2012 model on our streets. The new vehicle has been seen out and about near the BMW factory in Germany, and as with most new cars like this had a strange camouflage to hide some of the new features.

However, that did not stop Autoblog spies from seeing what new goodies the 2012 Mini Coupe will have. The one that got out interest the most has to be that retractable spoiler, this is not a new concept, as other cars have been using such a system for years; but it is new to the Mini. Damon Lavrinc added that this was not seen in the concept design way back in 2009.

The engine is expected to be a 1.6-liter turbocharged unit, but we have no details as to how much power it will produce. There seems to be little chance of an appearance at Geneva, but we do expect to see it at Frankfurt later this year. Sales should begin later this year for both US and Europe, but we have yet to learn its price. 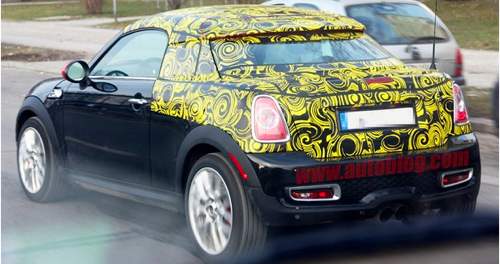 There are rumors that the smaller Mini will be on show at Geneva next month, but Cars Guide does not expect to see the vehicle enter production until 2013 at least. This is certainly a long time to wait, and by then we should have a good idea of what the new BMW Mini design will be, as the current model is now starting to show its age.