It wouldn’t be the first time we’ve seen stock run low of Apple’s all-in-one desktop computer, which happened in the United States previously, although now it seems that the UK could be signaling the imminent 2012 iMac release with a launch date near next weeks Apple event.

The Apple press event for Oct 23 saw invites go out as we predicted, the normal 7/8 day window, but this event should focus on an announcement for Apple’s new iPad mini and if recent rumors are correct, would also share the stage with some other “little” products like a slimmer 2012 iMac and smaller Retina MacBook Pro.

You can see an image below that shows Apple’s stock for the current iMac model, UK Store, and clearly shows shipping dates have slipped to 1-3 business days, which had previously been instant. Apple has been known to take orders like this previously and then ship a new model, especially this close to the upcoming event, although this can certainly confuse consumers with what product they order and expected specs. 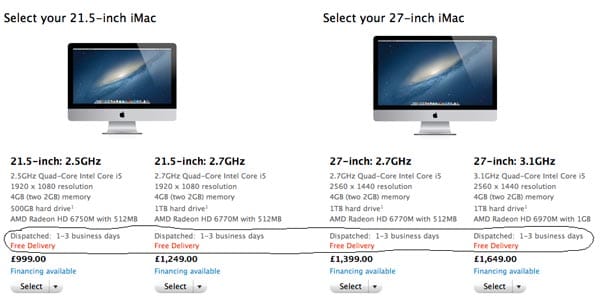 Are you ready for a 2012 iMac, and if so what specs are needed to receive your money? It is worth noting that the US Apple Store currently has the iMac tagged as “In Stock“, so unless we see this change within the next couple of days this could just be wishful thinking.

You can read a little more about the iPad mini and how its price can have a knock-on effect in this article, although with money tight for some people we wonder what products fans will choose, especially if Apple release three new products at next weeks event.