There comes a time each year when you can be almost certain that a new Apple product is about to launch, and in the case of the 2012 iMac and its release date there are some obvious clues. You will see availability drop on selected models, most suppliers will have hardly any stock, and you could also see a delay with orders placed on the Apple Store. These are all things that we’ve heard about over the last week, so it certainly seems like the 2012 iMac is about to get a release date.

Apple’s product launch timeline, created by an analyst, shows that there are a number of products releasing in the coming weeks, most notable is the iPhone 5 with a release date expected around Sept 21, and according to the this article and an image seen below, it seems that a number of retail stores are reporting in-store pickups on or after Sept 19.

If the iPhone 5 is given a release date from Sept 21 onwards, as suggested by the blocking of vacations at AT&T and Verizon, then it would be surprising if Apple launch the 2012 iMac in the same week, although it could be said that both these products are hardly competing with each other for consumer money. 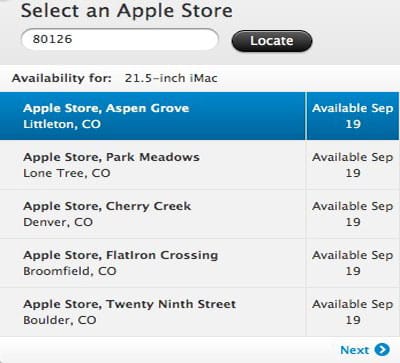 Apple’s 2012 iMac is coming but stock reports confuse — we know that the new iMac is about to release, even if it is based on rumors they’re pretty solid, but there are a lot of conflicting reports. The image above makes out that the delay in shipping dates also points to a launch of 2012 iMac. We wanted to check this and performed a search on the Apple Store for around New York, which resulted in an “in stock” status for all the stores we checked. This included Apple Stores in Upper West Side, Fifth Avenue, SoHo, and more. 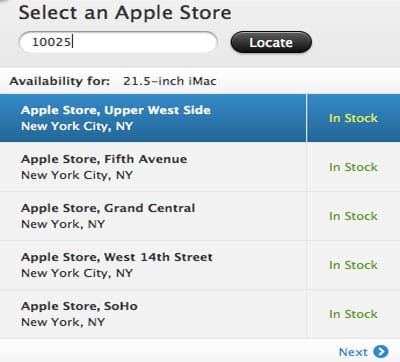 The 2012 iMac specs are confusing — the rumors we’ve heard over the last few months point to some better specs, but the major improvement will be made to a 2013 iMac, which has even been hinted at by Apple’s CEO. This hasn’t stopped some recent articles, on well-respected mainstream media websites, claiming that the new iMac could include a Retina display along with some other major upgrades, which is totally opposite to what we’ve been hearing all year for the refresh expected in 2012.

In our opinion Apple won’t want the focus taken off their new iPhone 5, so you can be sure to see a new iMac but it will be a silent launch, maybe worth a mention, although the online store could see an update with a new iMac that is more of a refresh with improved specs. This will be good enough for most people waiting for a new iMac, which is due to their growing impatience with waiting and money in the bank put aside for the 2012 iMac.

Apple iPhone 5 event confirmed, release date almost – We know when the iPhone 5 event will be thanks to invites being sent out, and the release date is sure to be between Sept 21-29 if the rumors of a vacation ban are real, so this only leaves us with the need to know exact pricing, design, and new specs. The iPhone 5 price is said to be around the same as last year and the design we can pretty much bet on from all the leaks. See our countdown in this article, just to make sure you get the event time right in your part of the world. Are you ready for the next iPhone?