Back in December we offered you news as well as a teaser video for the 2012 Hyundai Veloster ahead of the 2011 Detroit Auto Show. The new vehicle is said to be a utility coupÃ©, and we can see from the overhead shots on the Independent that it will come with a Panaramic roof — ideal, as it will give the illusion of more space.

However, that is not the feature that will stand out the most; those of you attending the show will notice that there are two doors on the passenger side as normal but just one on the driver’s side. Susan Carpenter from LA Times suggests that the price for the Veloster will be around $17,000-to-$18,000 — so let’s not expect too much on the spec front then. 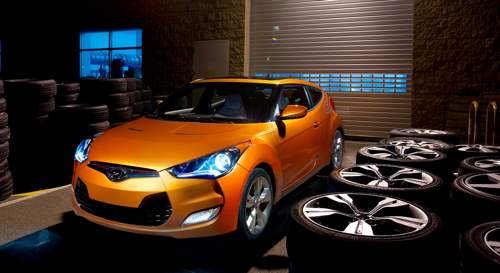 It is said that the latest Hyundai coupe is targeted at twentysomethings — so that price kind of makes sense now. As you would expect the car is front-wheel drive, but will have a dual-clutch system, which is said to help increase fuel-efficiency and acceleration compared to a standard automatic transmission.

There is no release date details as yet, but most rumors suggest that it will be sometime in the spring. The Hyundai Veloster has been in the planning stage for a few years now, as we first learned of the upcoming model back in July 2009. We have to wonder if it has been worth the wait?