Honda has unveiled its 2012 Civic Si Concept at the 2011 Detroit Auto Show, and there is to be two versions of the new vehicle, a coupe and sedan. It is said that the new Civic will have dimensions similar to the current version, but will look completely different. According to Auto 123 the design will be a little like the CR-Z, which as we know was said to be one of the worst cars of 2010.

Honda has not given anything away when it comes to what size engines they will use with the new Civic Si, but one would presume that they would stick with the current 1.8-litre and 2.0-litre i-VTEC powertrains. Maybe the Japanese automaker will shed more light after the press event of the auto show? 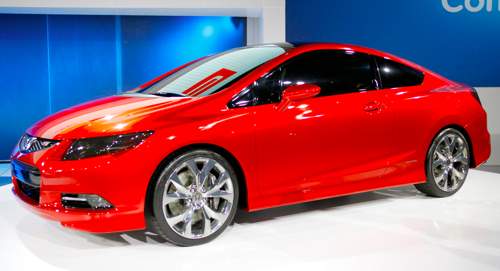 LA Times makes a note that the hybrid version of the new Civic will be the first Honda to use lithium-ion batteries, as well is incorporating the Eco Assist technology used in the CR-Z. This is a perfect system for drivers who wish to select which kind of driving mode best suits the situation.

Honda currently has 5 hybrid models in its range, and it is the two Civic models that are showing their age the most. Is it me or do they look like something designed in the 1980’s? Looking at the upcoming version it looks to me as if the design team has had a wake up call and finally going to give Honda drivers what they want.