As far as well manufactured and exciting cars go, Honda has in the past produced the goods when it comes to their flagship model, the Civic. However recently we brought you an article which featured a review of the 2012 edition, which left many of the popular car’s fans disappointed. For those of you that aren’t swayed by reviews we have some news about the car’s specs and price that the company has revealed.

The new Honda Civic is the ninth in the series which has been manufactured since 1972. It will begin shipping in January 2012 and is being manufactured at the company’s Swindon plant in the UK. Honest John says the top of the range version of the vehicle, the 2.2 litre i-DTEC EX GT, which features the highest specifications will set you back £26,595 while the basic model costs £16,495.

There are three engines available altogether, the 2.2 litre i-DTEC diesel and the 1.4 and 1.8 litre i-VTEC petrol engines, as well as four trim levels; EX GT, EX, ES and SE. All come equipped with six-speed manual transmission as standard with a five-speed automatic option available for the 1.8 litre petrol model. They will also all feature a fuel-saving ECON driving mode. Even the basic SE models will come already equipped with USB/AUX connectivity, automatic air-conditioning and alloy wheels.

As you would expect, as the trims increase in specs so too does the price. The ES models begin at £18,995 and get automatic window wipers and lights, optional sat nav, dual-zone air conditioning, reversing camera, speed limiter and cruise control all as standard. A premium sound system, heated leather seats and sat nav are added as standard to the EX models, which begin at £21,745 and the top model, the EX GT, gets additional tinted windows, bigger alloy wheels, a panoramic roof, bi-xenon lights, rear and front parking sensors and keyless entry and start functionality for £24,495. A collision mitigating brake system and adaptive cruise control can also be specified for an extra £1,900.

What do you think of the new Honda Civic? Will you be getting one in January? 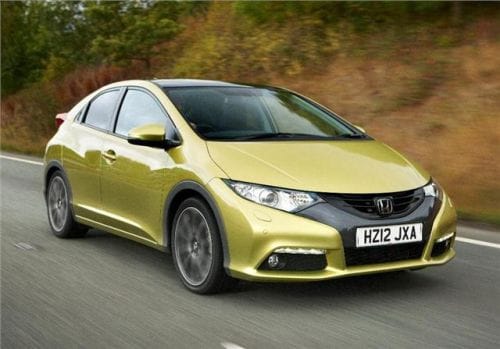