The 2012 Ford Focus will be different in a number of ways, but the biggest is how it will be launched in the U.S and Europe at the same time — something that did not happen with the current Fiesta. The Detroit automaker has a lot riding on this car, as we all know how competitive the hatchback market is. We have known the specs for some time now, but only now are some auto websites getting the chance to review this latest addition to the Blue Oval family.

Zach Bowman from Autoblog notes that the first and most important thing is how the new 2010 Ford Focus will compare to the likes of the Hyundai Elantra and Chevrolet Cruze; both of which have managed to put the fear up Honda and Toyota with the Civic and Corolla respectively. The current Focus has been popular in the UK for years now, so you would assume that the new-generation model would do as well. However, I was a little shocked when I watched last Sundays episode of Top gear, where all three presenters agreed that it did not offer much and was just plain boring.

Looking over the review we can see that one off the most disappointing factors is its fuel-economy, as it is unable to achieve 40mpg highway. However, Bowman does say that if you can sacrifice those few extra miles per gallon, then you will be rewarded with a car that has great handling — the choice will be yours to make. Although you will soon have the best of both worlds, as an electric version is planned. read our recent article for pricing details. 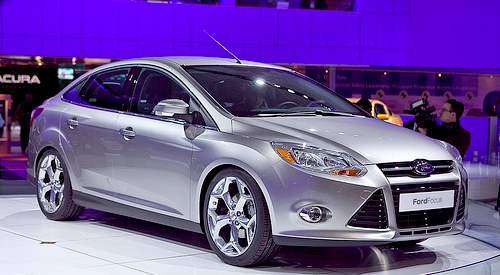 As you expect Digital Trends has gone a little deeper with their review, not with the car and how it handles, but the technology that the driver will be using. The Titanium is the model that they had the issue with the most; it seems that it might not be worth paying the extra, as you get little back.

To get you closer to the 2012 Ford Focus we have embedded a video for you below.